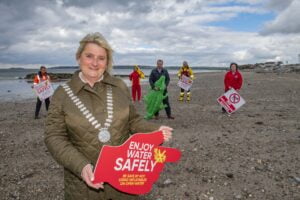 Organisations Warn About the Dangers of Inflatables on Open Water

Cork County Council in conjunction with the Irish Coast Guard, RNLI, Water Safety Ireland and a number of other Local Authorities have produced two short films on the dangers of using inflatable toys in open water.

The six-minute educational videos, one aimed at primary school children and the other targeting adult audiences, were launched virtually on May 6th with students of Ballyvongane Primary School, one of whom feature in the children’s safety video. The key message is Enjoy the Water Safely but Be Safe by not using inflatables on open water.

Mayor of the County of Cork, Cllr Mary Linehan Foley, welcomed the campaign saying, “Many people are simply not aware of the risks associated with using these toys on open water. The film features real life footage from Coast Guard rescues and the eyewitness accounts truly bring home the very real dangers of inflatables. An unprecedented number of rescue callouts were caused by floating toys or devices last Summer. With most people holidaying at home this summer, its vital parents and guardians know inflatable toys do not belong on open water. The video is available to schools to ensure the message reaches both adults and children.”

Members of the Emergency Services, including the Coast Guard, RNLI & Lifeguard Service, outline the dangers of inflatables in the film. In the children’s version, young presenters Tadgh & Aisling, Water Safety Champions, explain through amination the effects wind and currents have when using these toys in the open water.

John Draper, Divisional Controller with the Coast Guard said, “Last year The Coast Guard coordinated the responses to 20 incidents where small inflatable dinghies, Lilos and inflatable beach toys were involved. This was a threefold increase in this type of incident from the previous year. Tragically 2 of these incidents resulted in two fatalities in addition to 3 near drowning fatalities. We would ask the public not to risk their safety on the water by using these inflatable toys.”

John F M Leech, Chief Executive of Water Safety Ireland, advises “Inflatable toys should never be used on our waterways as Ireland’s temperate climate is not suitable for them, with wind they become floating killers.”

Kevin Rahill, RNLI’s Water Safety lead, said “With good weather providing opportunities to go to the beach, lake or river, it is important to remember that inflatable toys are not designed for open water. They are the cause of many incidents responded to by the Irish Coast Guard, the RNLI and the lifeguards as they can be swept out very quickly by wind and currents, often faster than someone can swim after them. They can take a child out of their depth very quickly and as they are unstable, there is a high chance of falling off and ending up in the water. Let’s keep everyone safe this summer and avoid using inflatables in open water. These videos provide some very important information and explain why inflatable toys pose a danger in the water.”

The two films will be available on Cork County Council’s YouTube channel and promoted by the Local Authorities, Emergency Agencies, Local Sports Partnerships and relevant Departments to emphasis this key water safety message. An online awareness campaign to promote vigilance on the water will follow on @Cork Co Co Beachguards social media channels.

A video outlining the dangers posed by inflatables on open water